Suave is an open source F# library implementing a web server in a functional style. The source code is on GitHub and releases are available on NuGet like most .NET open source projects these days.

You can find the full sample presented here as a Visual Studio 2015 project on my GitHub. I’m using Paket to get the Suave package but the standard NuGet UI would work as well (albeit slower).

The minimal hello world is simply :

Maybe i’ll blog more about the different combinators and how to combine them to reproduce a few common web server cases (Serving files, protecting access to some pages, …) but as this post is about IIS integration i’ll keep the hello world code and build from that.

IIS is the Microsoft web server present by default on Windows Server & Desktops. If you don’t already have it on your dev machine it’s available from the Turn Windows features on or off in control panel. The entry is named Internet Information Services and you can either go with the defaults or get everything under there. 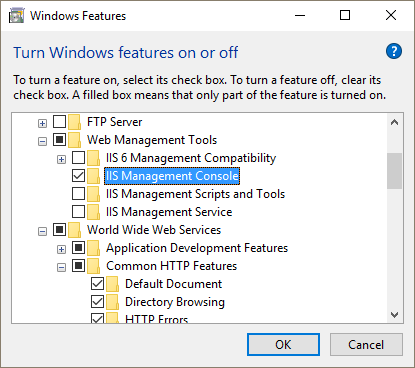 Once installed, start IIS Manager and create a website listening on a random port on IP address 127.0.0.1 with a Physical path corresponding to the bin/Debug directory of the hello world project.

HttpPlatformHandler is an IIS addon that allow to use any http serving application where the executable is able to receive the port to listen to via an environment variable.

To start the web site IIS run the executable with the HTTP_PLATFORM_PORT environment variable containing the port that it need to listen to and the module will then proxy requests to this port and sent back the response to the client. As the module insert itself inside the standard IIS processing it mean that things like logging, https certificates, respawning the process when an error happens or doing windows domain authentication can be handled by IIS without any change to the application code.

To install it start the Web Platform Installer (Either from your start menu or from the right side actions in IIS Manager) and search for it. 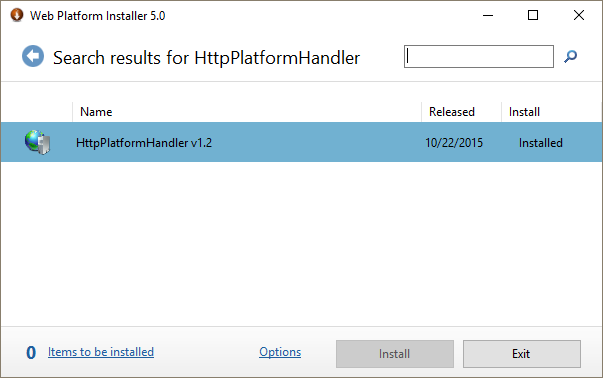 To be able to enable it per-site like we’ll do in the next step, open IIS Manager and in the Feature View for the whole server, open Feature Delegation and enable Handlers Mappings as Read/Write.

IIS expect it’s configuration in an XML file named web.config so you’ll need to add an xml file named like that to your project with Copy to Output Directory configured to Copy if newer with the content :

This assume that your exectutable is named SuaveIIS.exe so adapt accordingly.

For this to work you’ll also need to authorize IIS to read it, do to that open Explorer and change the Permissions on the bin folder to allow read & write access by the local IIS_IUSRS group.

Getting the port to listen to from F# Code

In the current state, HttpPlatformHandler will start your executable, kill it after 20s and restart it in a loop because it will never see it listening on it’s specified port so we need to read the port from the environment variable :

And then when we detect that we’re started from IIS (Because IISHelpers.httpPlatformPort is Some) we can configure Suave to listen locally on that port and nowhere else :

If you compile it and visit your IIS site in a browser you should see your Hello World being served by IIS.